As previously said, we were on our way to Catalan country. This is not quite true, we were coming from Catalan and going to Catalunya. One’s in France the other is Spain. Now, a fair amount of French Catalans don’t like speaking French, but an awful lot more Spanish Catalunyans passionately hate Spanish. So, my communication ability resorted to the old point and shout paucity.

After a couple of hours of Autoroute/Autopista we found our little turn up into the low mountains where a category 3 climb would proof an interesting watching point. A parking spot appeared 50m from the summit and we duely found our roadside place about 20m from the top.

Now came the defending. Standing or sitting on the exact roadside about 4 foot apart with bags between to discourage anyone from getting in front, behind, or above. It 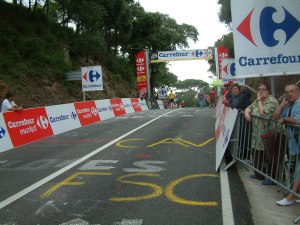 vaguely worked. We got to work writing “FSC” and “CAV” in big yellow letters in the Livestrong chalk we’d got given in Perpignan. Duely proud of our work, consideration made for where the cyclists would go to give us best coverage, we sat back to defend yet further.

The publicity caravan was as exciting as always, bar the amount of really pushy kids and even adults around. Ed used his height to beat the local Catalunyans and I was

just a little more guileful than others, standing a bit further back were a lot more of the tat ended up. I should be able to cover a number of children’s heads this summer camp. As always it’s “pour les enfants”, another guileful way.

Then, the wierdest thing of the day, getting interviewed. Yes, a TV crew came along, and suddenly started asking questions. I think the overhead our English and, being

American, thought that this would save on the translators afterwards. It was for an American documentary and as soon as Ed said he was now in Pittsburgh the camera shot to him. I was out of it. After a couple of attempts to jump in I left it. Back to me musings on my own. They kept on about drugs in cycling, so I was slightly relieved to not be really pushed. Ed was giving a very balanced response, which probably wasn’t what they wanted.

Suddenly they turned back to me and started asking about Tommy Simpson. It was quite overbearing but I found a voice and gave over the “cycling is the hardest sport”, “drugs were rife in the early days”, and “it’s getting better with every cheat they catch”.

Interview over, they got us to sign “Talent waivers”. Yes, we are officially “Talent”. Of course, the chances of me ever seeing the documentary made is very unlikely, giving the joy of obscurity straight away. I feel slightly hollow, that moment of fame disappearing steadily with each passing moment. Of course, if any of you plebs ever want to talk to me again you’ll have to go through my agent.

We got the news that David Millar was in a breakaway with a couple of other riders. 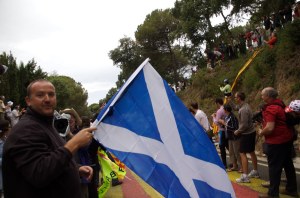 So, with each passing helicopter and police bike we jacked our heartbeat and enthusiasm into the stratosphere. Next us sprung up a Scot with the cross of St Andrew who lived a matter of minutes away. Funny, never saw him or the flag before.

At last the front three came past. Shouting and screaming abounded and photos of legs and blurred frames. Of course everyone was all over the road, including over our lovely yellow chalk signs. Sigh. Artistic work is never appreciated when there’s a Pro cyclist in spitting distance.

Astana to the fore. That breakaway wasn’t going to make it. Clearly yesterday was a reminder to everyone that they can’t leave things to late when it comes to the final chase down.

It was the usual scrum trying to get out again. Cars were blocking everyone in, and the hunt for the flourescent Tour de France arrows crept into our thoughts. First ones were missing, but furher down the hill a “Stop! Arrow!” got Ed’s attention. Arrow duely collected, we calmed down and settled back into our return journey. Until “Stop! Arrow!” came up again. We had one for Ed. And finally “Stop! Roundabout arrow!” and we had the full set.

Tomorrow is my last day in France. I may report about Cathar castles or not depending on the whim of the moment. Either way “bon chance”!

But I usually do it at RadWagon.co.uk.